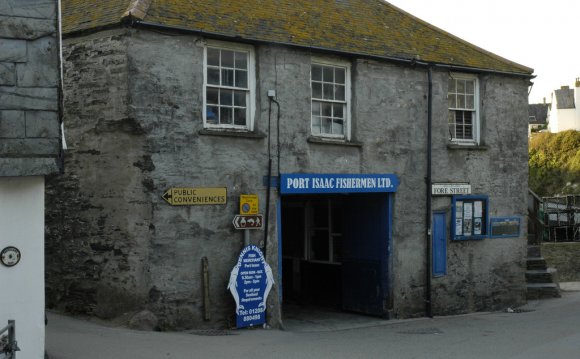 These were brothers Julian, John and Jeremy Brown and Peter Rowe, all men of the sea; Jon Cleave, local shopkeeper and author of a series of children’s books featuring a mischievous seagull; potter and guitarist Billy Hawkins; engineer and smallholder John Lethbridge, who is known to everyone as Lefty; and two builders, John McDonnell and Trevor Grills.

It wasn’t until 2009 that they were joined by Padstow fisherman Jason Nicholas, taken in to the group as much for his accordion-playing skills as his singing.

In time, the Fisherman’s Friends began doing a bit of fundraising by performing on the Platt, part of the harbour at Port Isaac — a picturesque 14th century village which is the setting for ITV’s Doc Martin. Soon, their popularity was no longer confined to Cornwall.

Radio 2 DJ Johnnie Walker, on holiday in Port Isaac, was given a couple of self-produced Fisherman’s Friends CDs which he handed to his manager, Ian Brown, who came to hear them sing in a local hotel.

‘By the time I’d reached Devon on my way home, I had them a deal with Island Records’ says Brown.

One newspaper headlined the story: Cornish Fishermen Land A Whopper Of A Deal.

Life quickly went into overdrive for the Fisherman’s Friends. There was a documentary on ITV and a book.

There were headlines about this new ‘Buoy Band’ — with a combined age of 562, and national tours during the less busy winter months (they never gave up their day jobs).

They sang at the Queen’s Jubilee and on the main stage at Glastonbury, and last week it was announced that a film is about to be made about them, directed by Nigel Cole, whose Calendar Girls, Saving Grace and Made In Dagenham have been similar warmhearted tales about typically English triumphs.

In February this year, still riding the crest of a wave, they appeared at London’s Festival Hall as part of a tour, followed by shows in Cheltenham and St Albans. A sold-out appearance in Guildford was to be the last of that cluster of dates.

February 9 turned out to be a bitterly cold day, near-horizontal sleet chilling the marrow of your bones.

‘We arrived just after 11 in the morning in a minibus driven by Lefty, and started unloading prior to setting up our stand in the foyer, ’ says Jason Nicholas, 41.

As always, they’d been met by their promoter, Paul McMullen, 47.

‘A fantastic chap, ’ says Lefty, ‘a really cracking man. Nothing was too much trouble for him — and he always had a smile on his face.’